Elio Espana could be considered New Yorks best kept secrets. Respected by those who know tattooing, he isn`t a household name, like some artists seeking fame.

Described as “very influential” and “the original” Elio Espana has been tattooing for over 30 years. After 15 years as the owner/operator of FlyRite Tattoo Studio in Williamsburg, Brooklyn, Elio can now be found tattooing in Constable, New York.

Just about as old school as you can get. He got his start working in the new York hardcore punk scene in the early 80’s. and opened his first store just before tattooing in New York was legalized again in ’97. During that prohibition era Tattooists went underground or closed up shop. Elio  stayed open and used to tattoo the  NYPD when they came by. Flyrite is definitely old school Americana. Lots of fine lines and shading. 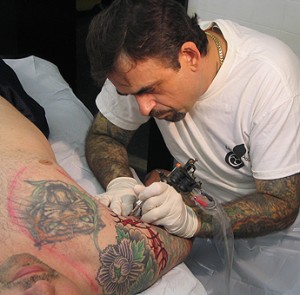